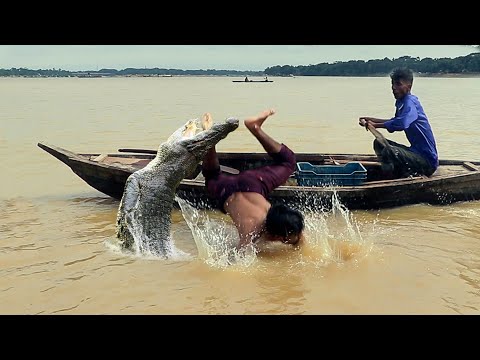 Documentary
Share on Facebook
Share on Twitter
Share on Pinterest
Share on LinkedIn
Crocodile Attack Man in Fishing Boat | Animal Attack at the time of catching fish , Fun Made Movie By Wild Fighter
In Africa, when you get closer to the water, you need to be careful about one thing; Crocodiles… Historically, crocodile attacks are 100 times deadlier than shark attacks—and far more frequent—ranging from harrowing individual confrontations to a mass attack on World War II soldiers. A crocodile’s jaw crushes down on its victim with 3,700 pounds per square inch of force #crocodile #animalAttack The two species with the most well-known and documented reputation for preying on humans are the Nile crocodile and saltwater crocodile, and these are the perpetrators of the vast majority of both fatal and non-fatal crocodilian attacks. But there have been numerous incidents where, against all odds, humans have defeated these ancient reptiles.
1. Saltwater crocodiles are giant and deadly—avoid them. Most attacks occur near or in the water. A saltwater croc can weigh more than 2,000 pounds and launch itself with its tail. “The Dominator,” a famous 20-foot long crocodile in Australia’s Northern Territory, was known to have leapt up past the railing of a tour boat on the Adelaide River. During World War II, the Imperial Army learned firsthand how deadly saltwater crocs could be in the Battle of Ramree Island. On January 26, 1945, the Allies launched an attack to retake Ramree from the Japanese. Forced to retreat, some soldiers headed to the mangrove swamps. Either unaware that the waters were infested with crocs, or vastly underestimating their power, British soldier and naturalist Bruce Stanley Wright estimated only 20 of the 1,000 soldiers survived the night. It was possibly the worst crocodile attack in history. Pro Tip: Swim in areas marked safe for water activities—and even then, keep an eye out. Boaters should avoid leaning over the side of their watercrafts: Crocodiles not only snap at dangling limbs, but they can jump on and capsize small vessels.
2. Faced with a croc? Back away slowly and run in a straight line. In 2016, a video of a woman making noise with her flip flop to scare away crocodiles in Kakadu National Park, Australia became a viral sensation. While she was successful, confronting a crocodile is a risky thing to do. Pro Tip: If you spot a croc, back away slowly and try not to make sudden movements. Splashing in water will only draw attention. If a crocodile heads your way, run away in a straight line. The myth about moving in a zig-zag motion is just that—a myth. Crocodiles can move at 10 miles per hour, so remove those flip flops so you can run faster.
3. A crocodile’s eyes are impressive and vulnerable—gouge them. In 2014, Stephen Moreen waded into water near Peppimentari, Australia to retrieve geese he had been hunting when a crocodile grabbed his arm. The croc began to roll him under the water when Moreen spotted the croc’s eye and poked it with his fingers. The creature released him and swam away. A crocodile’s eyes are impressive: They can see underwater and at night, and they can retract during a fight. They are also, however, one of the most vulnerable parts of the creature’s body. Pro Tip: If you are ever in the unfortunate situation of engaging in battle with a croc, aim for the eyes. .
Subscribe for more great contents Follow us on Facebook: facebook.com/wildfighter
Follow us on Twitter: twitter.com/wildfighter
Any queries, please contact us at: syed.sajadul@gmail.com
#CrocodileAttack #Animal #Crocodile
credit video : few footage are taken from 1. https://pixabay.com/
2. https://www.pexels.com/
credit sound :
https://freesound.org/
you can see full list from below link
https://freesound.org/people/syedsajadul9251/
https://www.zapsplat.com/
Share on Facebook
Share on Twitter
Share on Pinterest
Share on LinkedIn